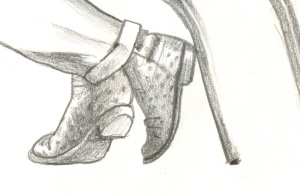 Jeff Wuebker, a pork producer and member of the Livestock Care Standards Board, deliberating.

Responding to pressure from veal farmers, the Ohio Livestock Care Standards Board voted last week—by a 6-5 margin—to erase a new standard that would have granted veal calves enough space to turn around in their stalls.

The vote has jeopardized a delicate compromise between the Humane Society of the United States (HSUS) and agricultural trade groups.  Now, the board has until April 5 to reach a consensus, and is accepting public comments on veal standards until Tues. March 15, at ecomments@agri.ohio.gov. END_OF_DOCUMENT_TOKEN_TO_BE_REPLACED

Farmers and animal advocates will give Cincinnatians plenty to chew on in the coming week, during two public discussions of Ohio’s proposed farm animal cruelty prevention bill.  By requiring that pigs, chickens, and veal calves have enough space to stretch their limbs, the bill would require the state’s industrial mega-farms to operate more like the small, traditional animal farms which they have squeezed t

o a small corner of their market.  Aimed at protecting animals, the bill would likely reduce the competitive disadvantage at which these small farms find themselves.  In the long run, farmers and “slow food” enthusiasts hope it might keep small-scale farming viable for younger generations.

Gene Baur, president and co-founder of Farm Sanctuary, will speak Saturday afternoon about his work and Ohio’s bill.
END_OF_DOCUMENT_TOKEN_TO_BE_REPLACED 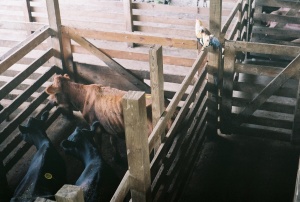 Young cows await the auction pen at White's Livestock Auction in Indiana; a rooster looks on.

A proposed constitutional amendment that defines minimum welfare standards for Ohio’s farm animals, has been cleared by Attorney General Richard Cordray to move toward November’s ballot.  The bill is sponsored by Ohioans for Humane Farms, a coalition of local and national humane societies, consumer safety groups, and others.  The organization’s supporters have until June 30 to gather 402,275 valid Ohio signatures, for the amendment to appear on November’s ballot.

If the bill passes, Ohio’s still-unformed Livestock Care Standards Board will be required to enforce these regulations:
END_OF_DOCUMENT_TOKEN_TO_BE_REPLACED