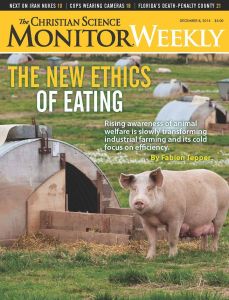 I was gobsmacked to learn this week that my December cover article for the Christian Science Monitor’s weekly magazine was granted a Genesis Award by the Humane Society of the United States, for “outstanding reporting and creative portrayals of animal-protection issues.”  The story explores a slow shift away from the most extreme forms of animal confinement, on U.S. industrial-scale farms. An accompanying sidebar looks into the international dimensions of these changes.

After Sentient Cincinnati’s last post went up two years ago (to the day!), other reporting work has kept me busy and far from Ohio.  A few weeks after Cave Trout was published, I moved to Istanbul for a season, where I reported from the gassy front lines of the the Gezi Park Resistance Movement in a photo essay and a series of interviews.  When I left, I moved to Boston to write for the Monitor.  I continue to work there part-time, which has allowed me to join the happy ranks of dog walkers!

To make up for lost time, here’s a smattering of animal-related science and policy stories I enjoyed writing for the Monitor’s science desk last year:

One thought on “Proud recipient of a Genesis Award”