John Clark Jr. of Lucky John Slow Market on Woodburn Ave., with his wife Beverly, their son Daewon, and a dozen eggs from Fishbach Farms.

“Ethical Eggs.” “All-Natural.” “Cage-Free.”  Are the approval stamps on egg cartons just marketing claims jostling for space on our grocery bills?  Or can they tell us something about the lives of hens?

This week’s half-billion-egg recall has brought egg production under sharper scrutiny, amid an already swelling river of documentary studies and social movements critiquing animal food production.  Last spring, Slow Food International opened a Cincinnati branch and hundreds packed into a lecture by food policy writer Michael Pollan at Xavier U.  Just two months later, the novelist Jonathan Safran Foer surprised readers with a sweeping work of journalism and family history, “Eating Animals,” which includes a critique of Pollan’s arguments.  In 2009 and 2010, stakeholders and experts convened for the city’s first two Regional Food Congresses, to discuss “the Cincinnati food system, its programs and practices, and to create a vision for change.”  And this spring, over 500,000 Ohioans signed a petition in support of a referendum which would require that all of the state’s laying hens, veal calves, and pregnant pigs be given enough room in their cages to turn in a full circle and stretch their limbs.

Noting this rise in concern–and in some cases helping to cultivate it–food industry, animal protection, and government groups have created a clutter of labels to reassure us that some animal products have wholesome origins. For now, the number of these systems and the lack of consensus on who should evaluate them, make it difficult to navigate labels.

I interviewed local food businesses and certification agencies to understand what the writing on the carton means for egg-laying hens. The chart below should be useful to egg-buyers around the country (download it in higher-quality pdf format by clicking here).

One important thing to know about commercially-available eggs in our country, is that over 95% of them come from chickens in stacked wire cages without access to sunlight, dirt, nesting spaces, or solid ground.  Under this industry standard, each hen lives in half a square foot of space.  Deeming these conditions inhumane, Europe has banned wire chicken cages from 2012, California from 2015, and Michigan from 2019, but they remain the norm in the rest of the U.S.

This type of confinement causes an array of health and behavioral problems for hens, including cannibalism–a problem which factory farms solve by “debeaking” chicks at birth.  This process of slicing off up to half of a bird’s beak–but, more commonly, just the tip–was developed at the Ohio Agricultural Experiment Station in Wooster in the 1930s, when a popular theory held that chickens’ beaks were without sensation.  Biologists have since determined that beak tips are particularly thick with nociceptors. the neurons which transmit pain.  And on some beak stumps they have found neuromas–the tumors of nervous tissue associated with chronic “phantom pain” in human amputees.  Four European countries have banned debeaking on grounds of inhumaneness, but only one of the U.S. labels I looked at–Animal Welfare Approved–excludes the practice.

Meanwhile, U.S. companies are under no obligation to tell consumers where their eggs come from.  Instead, caged-egg companies call buyers’ attention to stamps reading “Natural,” “Vegetarian Fed,” or “United Egg Producers Certified”– claims which, I learned, have no bearing on animal welfare standards.  United Egg Producers is a trade organization that supports its member’s rights to maintain current standards, so its stamp of approval does not reflect a third-party evaluation. 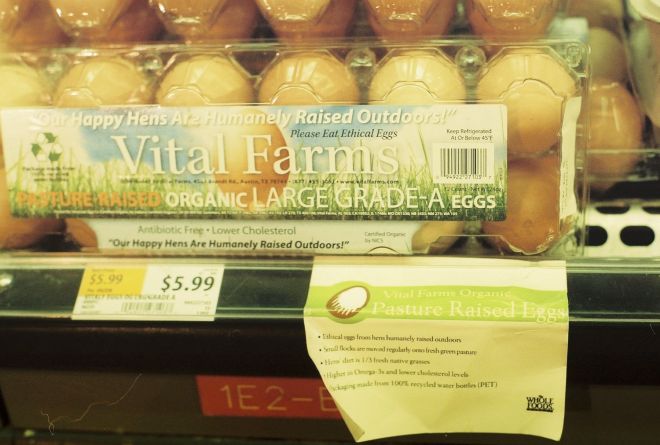 A dozen eggs on sale at Cincinnati’s Whole Foods store, from pasture-raised hens at Vital Farms. The Austin, TX company boasts, “Vital Farms is home to some of the happiest hens in the world. Our girls live like birds should, on organic green pasture under open skies, so their eggs are better for you, tastier, and much more humane!”

The other 5% of U.S. eggs come from hens raised in one of three systems.  “Cage-free” environments are usually large barns with open floor plans, in which chickens may be kept at very high densities, but are free to move through the crowd.  “Free-range” systems are typically similar, but hens are given access to an outdoor space.  Critics call the term misleading, pointing out that “access” can consist of a small door to a outdoor enclosure that accommodates only a few birds at a time–and only those individuals who are disposed to elbow their way through a dense throng.  “Pasture-raised” implies that hens spend a majority of their daylight hours (during fair weather) in outdoor spaces that provide vegetation and foraging opportunities.

But any of these terms may be specious if not confirmed by a relevant third-party certification.  And the chart indicates that “Animal Welfare Approved,” the only label made unavailable to farms which “debeak” laying hens using a blade, may also be the only one created with the basic needs of animals in mind.

Since 2008, Dublin-based Wendy’s and it’s sister company Arby’s have both committed to purchasing at least 2% of their eggs from cage-free facilities, joining a national trend among large restaurant chains.  But neither Wendy’s nor Arby’s has bragged about this shift to its customers–and Wendy’s spokesman Denny Lynch avoided linking the choice with animal welfare at all.

“We are aware of everything that is going on in the industry, and it seemed like a prudent decision to make,” he said, emphasizing that the “science” findings for and against cages still have not been reconciled.  Lynch’s neutrality about the company’s choice may reflect the heightened tension in Ohio’s food business world, amid this year’s political crossfire between animal welfare and industrial farm lobbies.

Erring on the other side of prudence, Bob Evans–half of whose restaurants are in Ohio–is among the last remaining national chains not to take part in the switch away from caged eggs.  Instead, Bob Evans and McDonalds have joined the Coalition for Sustainable Egg Supply, a program of the industry research group The Center for Food Integrity (CFI).  Comprised of America’s agriculture and food distribution giants, CFI conducts research towards its goals of  “increas[ing] consumer trust and confidence in the contemporary U.S. food system,” and finding “new ways of engaging to protect our freedom to operate.”  Typical of a shift in the language used by food industry groups since recent battles with animal welfare groups, CFI’s web site reads, “we must fundamentally re-define who we are and what we do as driven by principle.”

One local company which does not shy away from incorporating animal welfare into its principles is Lucky John Slow Market, a café and grocery store that opened last year in East Walnut Hills.  Lucky John is John Clark, who seeks out products from local small-scale farmers, and features foods prepared in Cincinnati by companies like Five Star Foodies, Fab Ferments, and Grateful Grahams.  His son, John Clark Jr. (pictured above), is a chef who returned to Cincinnati this summer, leaving behind a fast-paced Chicago culinary career to run his father’s café.

All of their eggs are brought into town from Fishbach Farms in Blanchester, Ohio, where, according to an alleged owner of the farm who declined to give her name over the phone, upwards of 100 chickens live cage-free in small peer groups.  Some live in a partitioned-off barns, and some range freely on a pasture with their 27 cows.  Hens who “start slackin’ off” in egg production, she said, retire to her nephew’s property, where they live out their natural lifespans in exchange for however many eggs they continue to lay.

Selling eggs only to neighbors until recently, Fishbach Farms attaches no “cage-free” claim to the second-hand egg cartons it uses, and the woman I spoke with said they had never sought humane certification.  Nor was she willing to let Sentient Cincinnati visit the farm, citing the danger to hens of shoe-born pathogens.

“I don’t really worry about people’s opinion, as far as how I take care of my animals,” she said.  “At nighttime I can sleep fine.”

Egg-buyers in search of a similar peace of mind might consider planning a fair-weather field trip: contact a few local egg farms and ask to see how their laying hens live, offering to wear hygienic shoe covers if needed.  The website http://www.localharvest.org can help you connect with farms, and the chart above can help remind you what to look for as you’re deciding what to support.

6 thoughts on “What lies beneath egg labels”