Michael Budkie has lasted 15 years in a career most people wouldn’t touch with a pooper-scooper: He studies the day-to-day life stories of animals stuck in laboratory experiments. 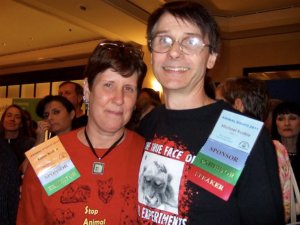 “That’s not exactly the Sunday comics,” says the 52-year-old from Milford, who has a degree in Animal Health Technology from the University of Cincinnati, and another in Theology from Xavier University.

Their goals: Hold accountable the defense, pharmaceutical and medical industries for their violations of the Animal Welfare Act. And let the public know what happens in animal labs.

In October SAEN unearthed records showing that a dozen musk oxen had died of starvation at a University of Alaska research facility. And last month the group released a list of the 20 U.S. research facilities that subject the greatest number of animals to painful experiments without anesthesia. In the middle of this list is Battelle Memorial Institute, a Columbus-based nonprofit company that does contract work for the Department of Defense (DOD), among others.