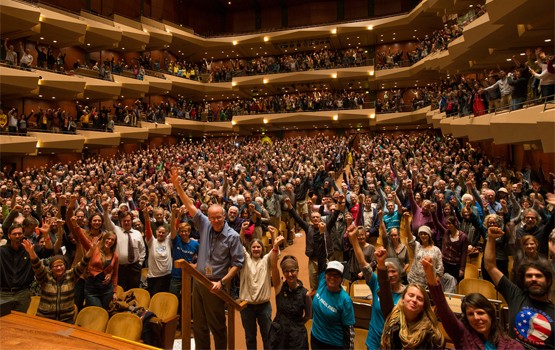 Bill McKibben and about 1900 supporters raised their arms in support of the new 350.org strategy in Seattle’s Benaroya Hall on Wednesday, November 7. Photo by Paul Anderson.

In a bold change of direction for the movement to stop climate change, environmentalist Bill McKibben and his global advocacy network 350.org unveiled a new strategy this week in Seattle: chip away at the power of the fossil-fuel industry through a large-scale stock-divestment campaign modeled on the one which helped bring down South Africa’s apartheid regime in the 1980s.

All 1900 seats were sold out in Seattle’s Benaroya Hall on November 7, for the first stop on McKibben’s planned 22-city tour. The audience delivered multiple standing ovations as McKibben explained the strategy: to curb worldwide CO2 emissions and global warming by pushing universities and other institutions to purge their stock portfolios of oil, coal, and natural-gas interests. 350’s slogan for this tour is “Do the math.”

That math is simple but stomach-dropping. Global leaders who drafted the 1999 Copenhagen Accord—including leaders of the United States and China who are resistant to climate action—agreed that a rise of two degrees Celsius (about 3.5 degrees Farenheit) above pre-industrial temperatures is the absolute upper limit humanity can approach and still avoid catastrophic climate change. In order to stay within that limit, we can emit no more than 565 additional gigatons of carbon dioxide into the Earth’s atmosphere. But fossil fuel corporations already possess oil, gas, and coal that would release 2,795 gigatons of carbon if burned. That’s five times the safe amount.

“Eighty percent of that,” said McKibben, “has to stay underground.”    Continue reading the full story in YES! Magazine »