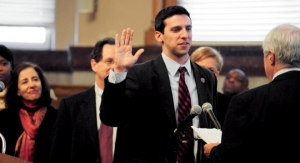 In preparing to interview newly elected Cincinnati City Councilman P.G. Sittenfeld, I was repeatedly visited by the temptation to ask him, “Are you as squeaky-clean as you seem?”

I listened to him, then 25 years old, deliver a bright-eyed, five-minute distillation of a book he was writing on happiness, onstage at the Know Theatre. Later that year he began to frequent a café where I worked.  He was impeccably warm, courteous and dapper as I served his business lunches and coffee, and I wondered what he was all about.

For one thing, I find, Sittenfeld is all about writing. If any hint of a dark side reveals itself, it’s while he scrambles to think of a character from literature that he identifies with.

“Oh, man … I think it’s one of those things where, you know, you fall in love with characters despite their imperfections sometimes,” he muses, giving a shout-out to John Milton’s imagining of a certain charismatic underworld figure in his 1667 epic poem, Paradise Lost.

After more thought, he decides on someone less controversial: James of Roald Dahl’s James and the Giant Peach.