Thanks for your patience with the rough edges of this, Sentient Cincinnati’s first video news piece.  We’ll work on shooting crisper audio for the next one.

Today at the Ohio Department of Agriculture in Reynoldsburg, a three-day hearing concluded to determine whether two men from Iowa will be allowed to build an industrial egg farm in Union County, that would use six million caged hens to make liquid egg products.

Ohio Director of Agriculture Robert Boggs had already denied a permit to Hi-Q Egg Products, saying that the company had not made adequate plans to fortify the road system in their would-be neighborhood of West Mansfield.

The company has appealed that decision, and their hearing was open to the public.

On Tuesday more than fifty people came to listen, and latecomers had to stand in the side aisles. Over half of them were activists who had come from around the state to protest Hi-Q silently, in response to an appeal from local animal rights group Mercy For Animals. 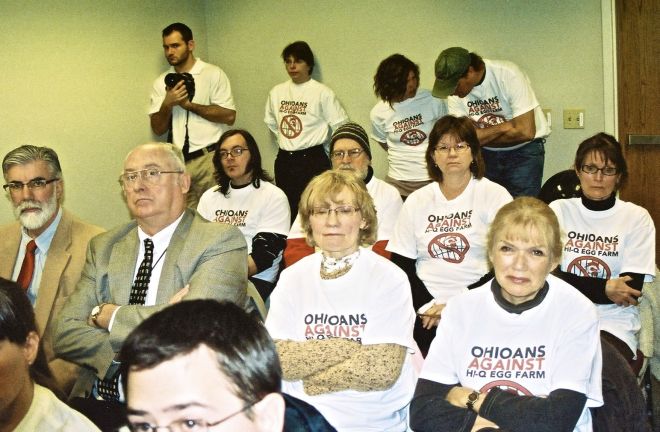 Some of those activists were involved in gathering the signatures that led to last summer’s “Buckeye Compromise,” an agreement between the Ohio Livestock Care Standards Board, Governor Strickland, and the Humane Society of the United States. If the agreement survives Ohio’s upcoming administration change, new egg producers who use wire cages will not be allowed in the state.

Lee Williams, resident of Columbus, Ohio: “We are aware of the conditions in these egg farms, where the chickens suffer greatly. Mercy for Animals has done a wonderful job of uncovering the abuses and the neglect and the suffering of the animals in these large operations, where five or six chickens are kept in a cage, where each lives out its life with an allotted space less than that of a page of typing paper. As citizens of Ohio, we object to this sort of industry being held in our state.”

Cecilia Petrak, resident of Parma, Ohio: “We drove out here for two hours to protest the Hi-Q Farm coming to Ohio.  Ohio has enough factory farms; we don’t need any more.”

Will Dudley, resident of Columbus, Ohio: “I’m here today because despite all the bureaucracy and all of the money and arguments behind it, we know what goes on in these factories, and it’s obviously not right.”

Katie Davis, co-founder of The League of Humane Voters of Ohio: “I’ve actually followed the whole issue of putting this giant egg farm in Ohio. I’ve been to other permit hearings, and I’m very concerned about the treatment for the animals.”

During the hearing’s recess, Mercy for Animals campaign coordinator Corey Roscoe got to know two highway patrolmen who had been hired to monitor the protest, and explained why her organization was there.

Corey Roscoe, Ohio Campaign Coordinator of Mercy for Animals: “The proposed factory egg farm is bad for the animals, the neighboring communities, the environment, and it’s bad for Ohio.”

But Hi-Q described its potential impact in other terms.

Steven Braig, attorney for Hi-Q Egg Products: “Hi-Q is an extremely experienced group of people in the egg industry, who bring 85-100 jobs to Ohio in a time when every single job in Ohio and throughout the country is absolutely necessary.”

Some of the most worried, and most silent people in the hearing room on Tuesday were neither animal advocates nor Hi-Q stakeholders, but unaffiliated observers who would not give their names or speak on camera. Of those I spoke to, all said they were Union County residents who did not want Hi-Q in their area. But they were afraid to voice their opposition in public lest the company sue them, as other egg companies have done, under Ohio’s “Food Disparagement Law.”

Attorney John Sproat has some experience with Buckeye Eggs, which used this law to sue a woman who had publicly denounced their food safety practices. Buckeye Eggs is now owned by Ohio Fresh Eggs, the state’s largest egg producer and the subject of the photos you saw a few minutes ago. Ohio Fresh Eggs made headlines last month, when it tested positive for Salmonella, prompting a recall of 288,000 eggs.

John Sproat, retired partner from law firm Britt, Cambell, Nagel, & Sproat: “I’m an attorney, presently retired. In the past, however, I’ve represented plaintiffs who sued a large egg confinement operation known as Buckeye Egg Farm. The trial was several years ago, and since then I’ve been involved in other lawsuits against huge animal confinement operations.

In the process of preparing for those trials I did quite a bit of research, reading of scientific journal articles, about the health consequences for the neighbors of CAFOs [Confined Animal Feeding Operations], as well as environmental concerns, and the concerns for animals who are housed in these CAFOs.

I came away realizing that this is a huge problem and actually very little of it is being explained to the public. The reasons I’m here is, it seems as though issues of animal rights are kind of taking on more importance.

People have asked, ‘What do we do about these CAFOs?’ Because it seems as though the government loves them, Big Agriculture loves them, the Farm Bureau sees no problem with any of them—it never recognizes that there are any difficulties or problems. However I know fully well that there are many, many problems. I’ve talked to neighbors, I’ve seen the animals in the cages, I’ve read the research articles. I know there are problems.”